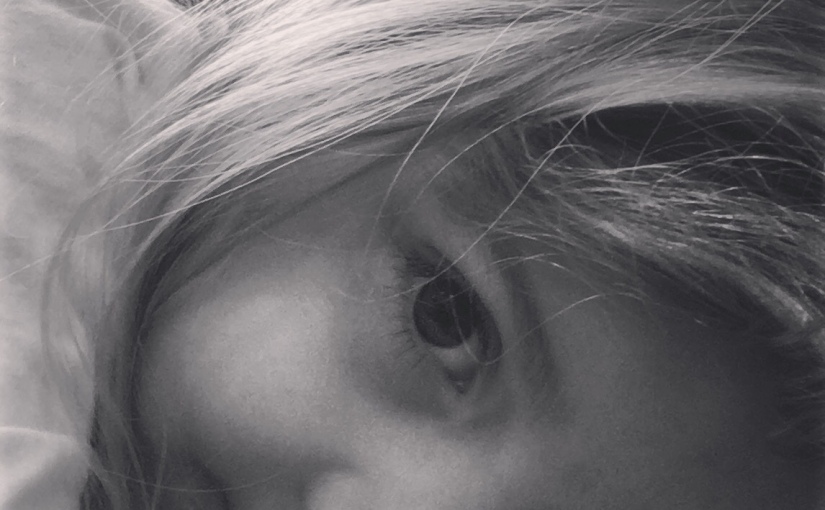 Of the two children born to me, I have one introvert and one extrovert. The oldest will greet a stranger with a hello and instantly become the best of friends; the youngest takes time to warm up to others – she has literally taken years to form some of the stable relationships she has now.

The oldest will try new foods and eat what’s on her plate; the youngest will eat applesauce and maybe a bowl of cereal – some days she “hates” both, leaving it difficult to satisfy her hunger on a daily basis. The oldest will maintain composure and knows the difference between “acting right” and “wrong”, leaving her meltdowns usually solely for me (her mother) at home and rarely ever throws a fit around others (except her dad); the youngest will have a meltdown anywhere, anytime, going from the happiest girl you’ve ever met to an unrecognizable human being in a matter of mere seconds.

My children are not alike, and it took me a long time to be able to mother them both separately without comparison. I’m now used to the fits/meltdowns of my youngest. I know when they’re beginning, I know the process, and I know when the end is near. She has had these fits since she was a baby, and I mean embarrassing, all-out apparent temper tantrums. Sometimes they would last hours and we would have several a day. Sometimes, they would be every day for a week; sometimes there would be a week between times. On top of a meltdown (which by the way HAS to fully end on its own – there is nothing at ALL that can be done to make it better from anyone else), she has severe OCD and many sensory issues.

Several doctors (including a neurologist) have cleared our daughter of the possibility of having any psychological or behavioral disorders. Additionally, I was certain she was autistic and was told she is not on the spectrum; she simply has an inability to self-soothe. Part of that is my fault. As a newborn baby, she and I (and the rest of our family, of course) were in and out of hospitals and nursing homes, etc. with my mom and I constantly held her – she was rarely ever put down. She has slept with us since the day we brought her home from the hospital, and I nursed her until she was 2 1/2. It brings (and has always brought) me comfort to know she is close to me, alternatively it does the same for her; but as a consequence, she could not function for a long time without being right beside me (usually on my left hip) – we have climbed mountains in her independence.

Currently, she is nearing five and it is up to her to overcome some of these issues and I can’t help her (I mean, that IS part of what has contributed to this in the first place). She has to be told no, and she has to accept what it means. She doesn’t throw a fit simply by being told no, but there are triggers to a meltdown and sometimes it is “no” and funny enough, sometimes even a “yes” answer will cause one – it depends on whether or not she is hungry, and whether or not she slept well (and enough) the night before.

From the outside, maybe it appears as though my daughter is a spoiled brat. Maybe it appears as though she needs a good spanking or a hug (depending on what type of parent YOU are). Maybe I should yell at her or make her leave the store. But, I still need the groceries or I still want to eat the dinner – whether we are experiencing a meltdown or not. Believe me when I tell you that it is has been incredibly exhausting at times. It has brought me to me knees in tears, as it instantly zapped every ounce of energy I had to face the day. It has made me furious. It has, at times, not affected me in the slightest because at this point, I know that it’s just part of it.

In her own ways, my youngest child is unique and amazing and so, so smart. She is beautiful and downright hilarious. She loves hugs and gives “smoochies” and thinks I’m incredible. She is excited and grateful and loves big. Also, she has fits.

How do her fits in public affect you? Well, they make you uncomfortable. You have to listen to MY child cry and you can’t do anything to make it stop and it seemingly goes onnnnn and onnnnn. Let me tell you that momma and daddy ears ring about 10 times louder while (what feels like) electricity jolts through our bodies. I promise you that if we could make it stop, we would.

Maybe you don’t know that my child was jumping with joy about Oreos (because mommy RARELY buys them) about 20 minutes prior, but when mommy gave her 3 (it was right before lunch, afterall) – she complained because she wanted to eat them out of the package (that pesky OCD kicked in again) and mommy said no because mommy had put them on a plate to eat in the car (my attempt at minimizing hundreds of chocolate crumbs from landing on my tan interior) – and that’s what started the fit. The fit that lasted all the way to town, on our way to have lunch with Papa. She didn’t get the Oreos. She didn’t get them because we don’t reward bad behavior AND the fit would’ve happened anyway. It wouldn’t have stopped because once it starts, it has to make its way to the end. On its own. I know that about my child, you don’t because you don’t know her.

The same fit lasted in the parking lot, up the stairs and to the outside door of the restaurant. She screamed, and jumped up and down, and cried. When she scraped her leg on the stairs (while jumping up and down) she yelled “you’re hurting me,” her immediate response to any pain she causes herself in a fit (again, I know this because I have experienced it- a lot). She continued to throw a fit while a customer inside (unbeknownst to me at the time) essentially told the waitress that I must be outside beating my child (which I assure you, I was not). The same customer who turned completely around in her chair to glare at me when I walked in with a crying child. The same customer who maintained eye contact while I took my daughter to the bathroom (despite me literally saying to her, “she’s having a fit, you can stop staring at me”), and continued to stare as we came out of the bathroom. That lady – doesn’t know my child (or me), and I sure wish she wouldn’t have passed judgement on a situation she knew nothing about. If she only knew how many times people have done something similar to my daughter (or me), and, that it hurts.

The customer didn’t know that because we took our daughter to a Jojo concert in Chicago the day before, she had slept in the car on the way home and therefore didn’t sleep well during the night. She was tired and that is the main ingredient for a full-blown fit. Instead, she passed judgement on her – and me as a mom.

When I hear a child scream in public, I look the other way. The last thing a parent needs is a look of disgust from a stranger on top of an already totally exhausting parenting experience. Thank you to the couple who sat next to us (and we later ran into at the grocery store as my girls were laughing and skipping while they raced to the shopping cart) and smiled at us, chatting between bites (of applesauce of course); and thank you to the waitress who brought both of the girls a surprise bowl of ice cream at the end of our lunch (as an apology for the very obvious and foul way the customer had reacted). The next time you see a screaming/crying/fit-throwing child (assuming the child is not in eminent danger), please, don’t try to help, don’t stare and do not judge. You have no idea what is going on, but just know that the child (AND his/her mom/dad/sister/brother/papa) is exhausted – please, just look away.

My name is Lauren Johnson. I’m a momma of four (two littles, two bigs); a wife to the most amazing man in the world - my legit soulmate; a daughter to an incredible woman who fought a brave and devastating fight against a Glioblastoma brain tumor that took her life, and a father who fought vigilantly in the Vietnam War to protect our freedoms; and a friend to so many wonderful people that I love so very much. I have my dream job working with preschoolers, while enjoying summers off with my babes. I love life in general, but more specifically art, children, outdoors, flowers, birds, laughing, reading, learning, adventure and travel. View all posts by livingthroughherlegacy